In the holdings of the Kaunas County Archives there are no records pertaining directly to the Holocaust. For the period of the German occupation of 1941-1944  the archives holds only records of Kaunas City Municipality,  which contain no information of the Jewish population of the city and Kaunas ghetto. Yet the records of the interwar period may be valuable for the Holocaust research, as they enable to find information about pre-war Jewish residents of Kaunas.

For the period of 1919-1940 the holdings of the Kaunas County Archives consist of the records of the municipality of the city  and its departments, various local agencies, state schools, private enterprises, etc. As after the Soviet occupation of 1940 municipal agencies continued functioning, in many cases these  records exist also for the period of the first Soviet occupation  of 1940-1941.

In the holdings of the Kaunas County Archives  there are no records of any Jewish organizations, societies, schools.

Records which give information about the residents of the city can be roughly divided into several categories:

1. Passport cards (personal identification documents). Every citizen of the Republic of Lithuania from the age of 17 was required to obtain an internal passport – personal identification document. Passports were handed to people while passport cards with photographs and basic personal information - given and family name, date of birth or age, place of birth, occupation, religion, nationality (ethnicity), marital status, under-age children, for males – information on military service – remained with the agency which issued the passport, in this case – Passport Department of Kaunas City Municipality. There are more than 100 000  such passport cards in our holdings, about one third of them – passport cards of the Jews. There are also about 800 passport cards issued by  Jonava district administration  of Kaunas County to its residents. Besides the cards, in most   cases there are also records, on the basis of which passports were issued – old German passports issued during WWI, applications (where address is indicated), copies of birth and marriage certificates, extracts from family lists, affidavits, etc.

The information is given only for the moment the passport was issued, so often it is difficult to trace the further  life of the person  – a student of 17, who was issued a passport in 1922 not always can be traced and identified in other records. Even if there is an application with the address indicated, it does not always help – during 20 interwar years people often changed their places of residence. In cases when there are no addresses or copies of  vital or other records, that would enable us to put the family together, passport numbers and reference numbers of the documents, on the basis of which passports were issued, may be helpful.

Thus, for example, the family of  Sheina Pertsikovich 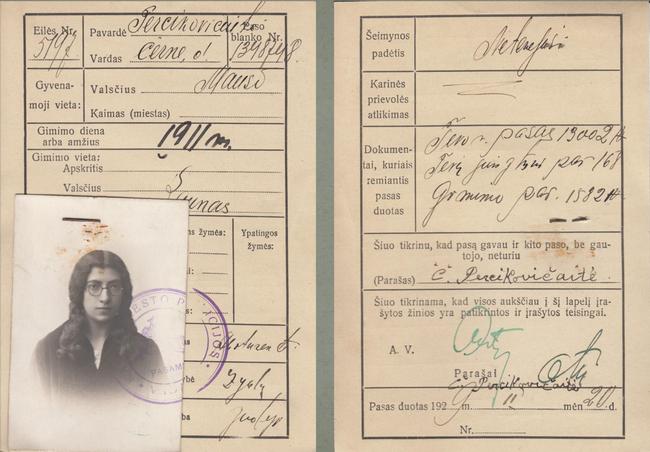 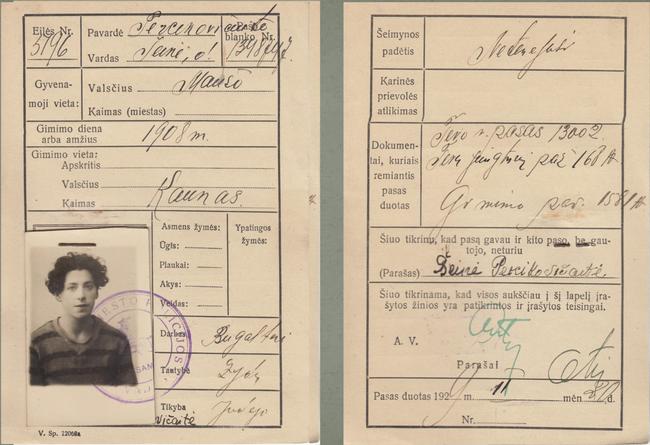 (a student in 1929, when she was issued a passport, later -  a well known painter, who perished in Kaunas ghetto in 1942) can be put together just on the basis of the  passport number of her father Moses Pertsikovich 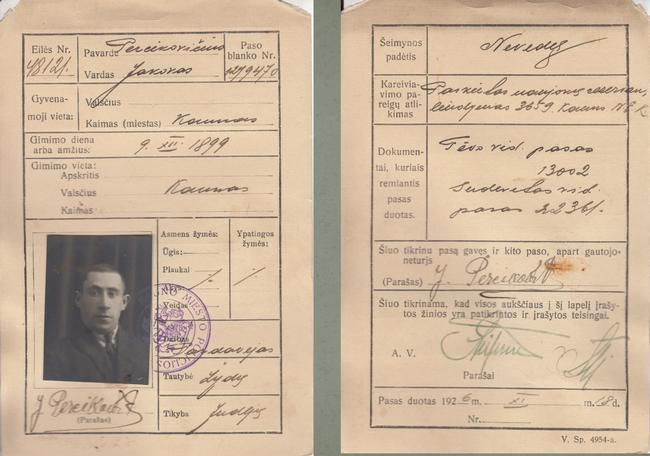 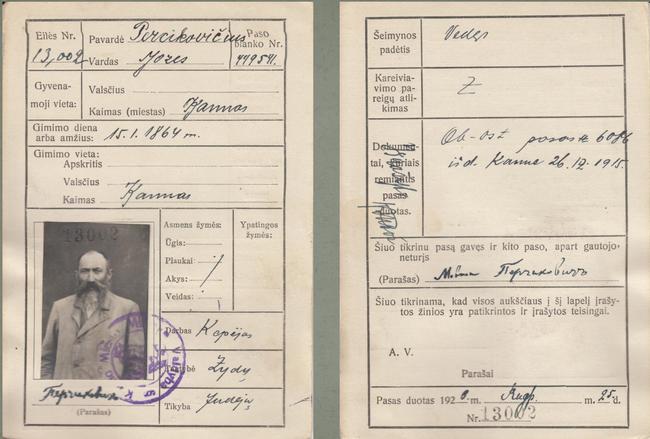 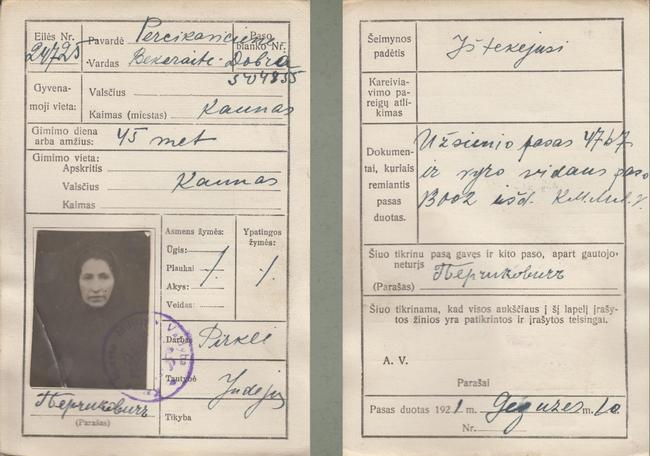 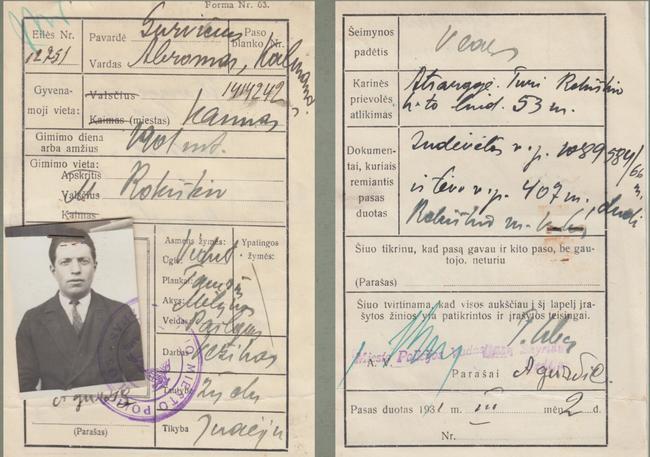 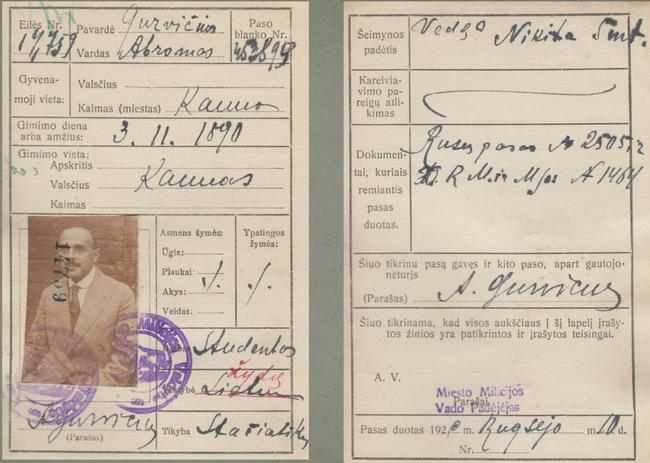 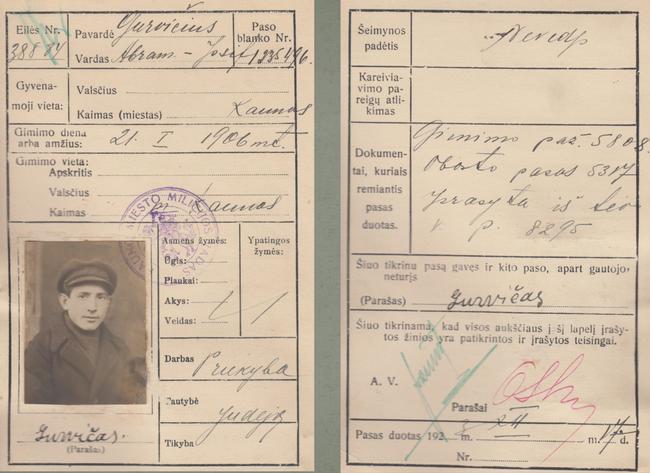 Passport cards do not exist for all the Jewish residents of the city during 1919-1940, as during this period the city grew considerably, and  many newcomers had their passports issued in their previous places of residence.

In our holdings there are no records on the issuance of foreign passports – though these documents were issued in Kaunas, yet not  by municipality, but by the officials of the Ministry on Internal Affairs.

2.Lists of army draftees. All the male residents of Kaunas at the age of 21  were registered by the Draft Commission of Kaunas City Municipality ( in 1923 – 1925 also elder men were registered), and the archives has these lists of draftees  born in 1892 – 1919 (with a few gaps). These lists not only contain valuable information about the draftee (date of birth, address, education, occupation), but also list  his parents and siblings.

In the list of army draftees of 1932  Abram Gurvich, born in 1906, for whom we have a passport card, is listed as a brother of a draftee Mordechai Gurvich. 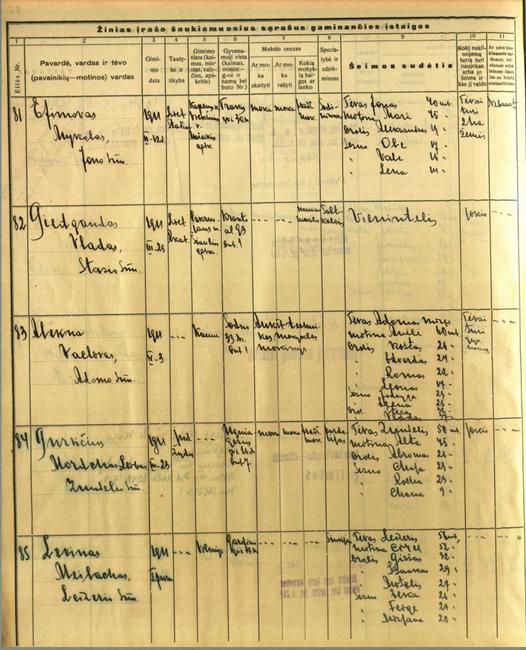 3. Voters lists. Adult residents of the city could participate in municipal and parliament elections, and in the fond of the Kaunas City Municipality there are lists of voters of 1922,1923,1926,1936 parliament elections, 1924,1931,1934 municipal elections; they are made according to electoral districts, by streets. Jews are not singled out here, people are listed just by names and adresses, age and, sometimes, occupation is indicated.The most informative and overall among these records are lists of voters made at the end of 1940 for the Soviet elections – elections of the Supreme Council of the USSR of January 12, 1941.

In these lists we can find the same Abram Gurvich, born in 1901 in Rokiskis, for whom we have a passport card, who is listed with his wife as living on Benediktiniu 16 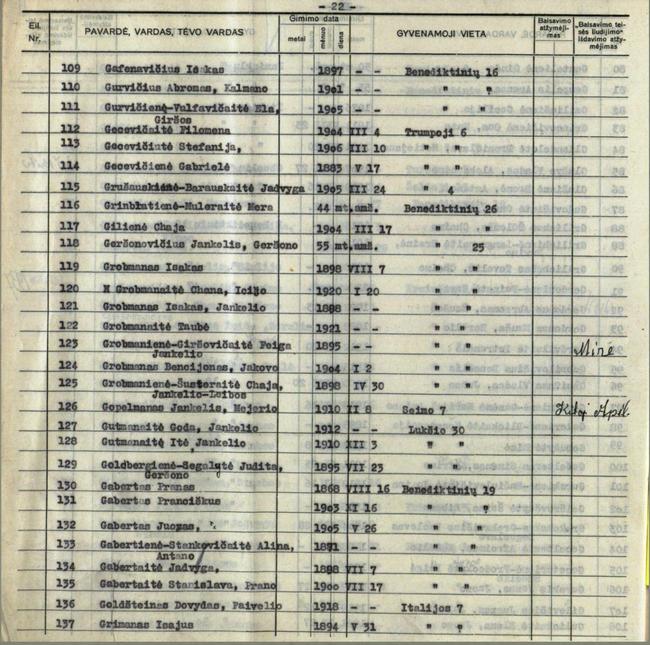 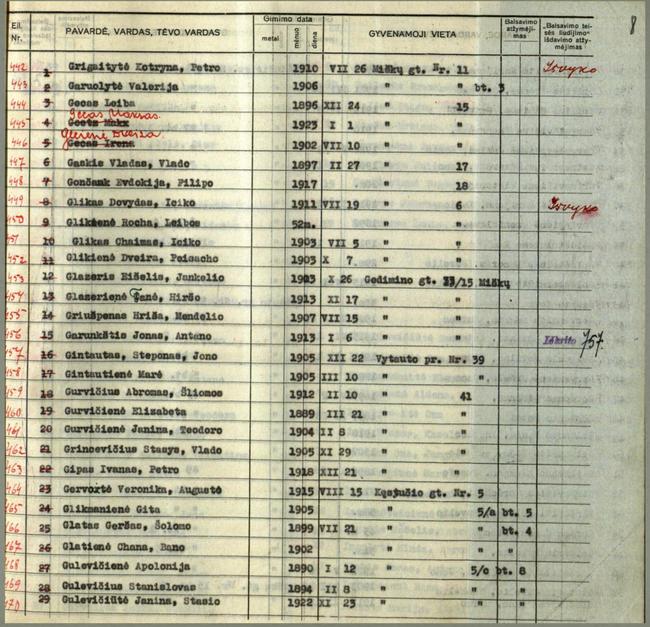 To the same category could be attributed a slightly different kind of records – inventories of apartments made by Statistics Bureau of the municipality in 1922, where information about physical condition of each apartment of each house on  main streets is given (they do not cover the whole city), and also all the tenants  of each apartment are enumerated, their age and occupation indicated.

4. Records of the Tax Inspection and Financial Department of Kaunas Municipality –   files on the payment of business, real estate , income taxes by separate people, which give mostly financial information, but also names and adresses of businessmen and real estate owners, and, in rare cases, -  information about their families. Some of these files also contain lists of employees. There are more than 7000 “Jewish” tax inspection files for the city of Kaunas, and about 900 for Kaunas County. These files exist mostly for the end of 1930ies. Among them there is a file on the payment of business taxes by Gurvich Abram, living on Vytauto 41, 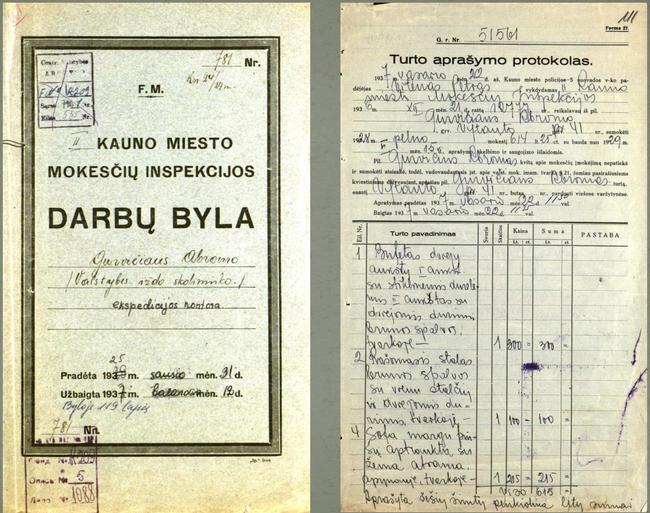 who appeared to be a former resident of   Kybartai .

The scarcity of  personal information about people in these files makes it difficult to identify the same people in other records.

5. Records of  Social Security Department of Kaunas City  Municipality – files on the relief payments and other forms of social aid given to the poor residents.They include more than 2000 files on poor Jewish families, and, in many cases, detailed information about the family is given.In this fond there is also a file of 1940 about material aid given to Abram Gurvich 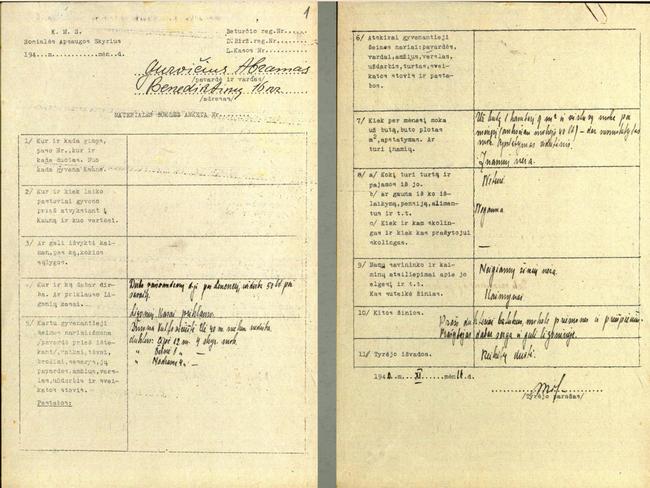 living on Benediktinių 16 (the same who was born in Rokiskis 1901), where his wife and children are enumerated.

All these records enable us to find information about the majority of pre-war Kaunas Jewish population, but  this process requires careful research and should be supplemented by the search in the records of other Lithuanian archives.

Biography: Vitalija Gircyte is a 1983 graduate of the Vilnius University, where she majored in History, specializing in the archives. After graduation she worked in the Kaunas Archives until 1988. She taught for several years, and returned to the Archives in 1994. She started working with requests for records in Kaunas Guberniya, which were at that time not of a genealogical nature. In 1995 when the archives started receiving genealogical requests, Vitalija knew very little about the sources of genealogical information. In a statement which is very typical of her modesty, she says, " I just tried to find out which moments of human life were documented in Kaunas guberniya, by what institution, and in what records." Today she is a real expert on genealogical research in the Kaunas archives.