My Family and I

My name is Ya’arit Glezer – Krakinovsky, and I was born in Kaunas in 1947.  My parents were also from Kaunas. I have one younger brother. We lived in the very center of Kaunas on Laisves Aleja. It was a 3 room apartment where 3 families lived together. All the neighbors were Holocaust survivors whom my parents let in since they had no family left and no place for them to live.

My mother, Rivka Discant, was the eldest in the family and she had three younger brothers. 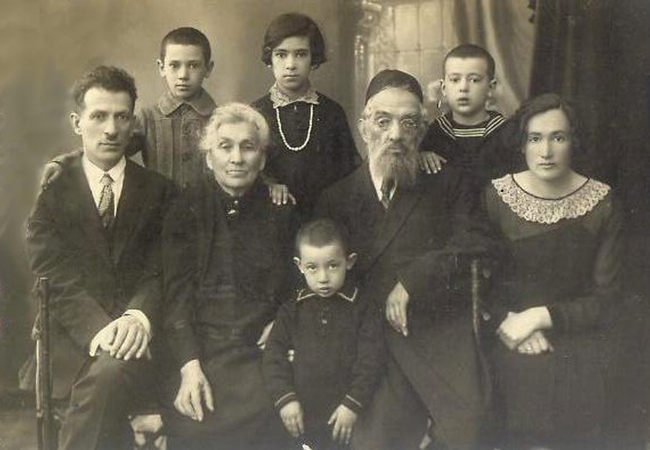 Before the war my mother went to Italy, and there in the university of Pisa she started to study medicine but was forced to leave Italy by Mussolini.

My father and my mother did not have the chance to get higher education. In 1941 my father was 18 years old and would have started to study but the German army invaded Lithuania and he did not manage to enter the college.  Only years after the war did they go back to study. I remember how we graduated together – I finished school and they finished college. I still remember how my father did all the drawing for her and she wrote the compositions in Lithuanian for him.

They both worked at the tobacco factory in Kaunas, and in our home you could always find cigarettes because they were really heavy smokers.

I went to school in Kaunas and the teaching in my school was in Russian. At home we spoke Russian and my parents between them spoke Yiddish, but when they did not want me to understand what they were talking about they switched to Hebrew.

Then we moved to another apartment that was just across from the War museum (Karo Muzejus), and there we used to spend a lot of time. In winter the central X-Mas tree was also there as well as a snow hill for sledding. Not always did we have a toboggan so we used plywood sheets and enjoyed every moment of sliding. 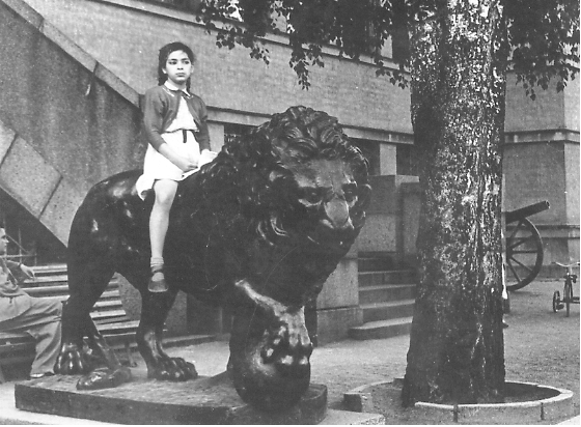 I think there is not a family in Kaunas that the kids were not photographed on or near the lions. Many years later when I visited Kaunas I could not resist and took a picture near the lions (well, I could not climb them at my age).

After graduating school I went to the university to become a teacher. I worked at a high school for 35 years and now I am retired.

Our family was not religious, and we celebrated the Jewish holiday in a very unorthodox manner. During Passover we had matzos but did not observe the necessary procedure.

I also remember that during the festival of Succot (Tabernacles) we, the youngsters, would go to the synagogue and there they gave us flags richly ornamented with gold, silver and some writing. I remember I came late and there were no more flags left. So I was given a very simple flag – blue and white. Sure I was very disappointed. And then my mother very quietly explained that I got the most precious flag – the flag of the State of Israel. That was I think the first time that the idea of going to Israel started to sound audibly in my presence. 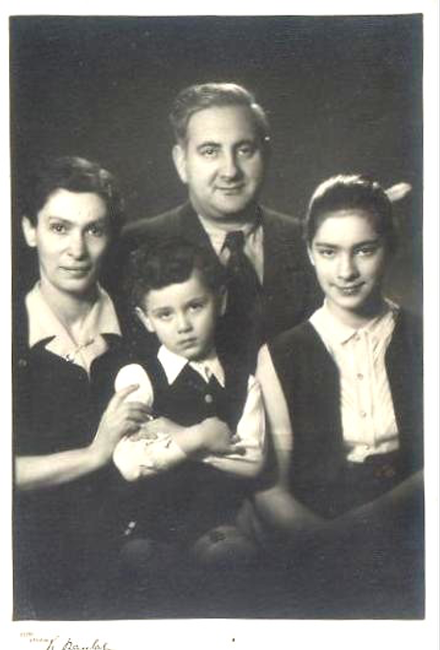 The holiday of Hanukkah was spent with friends and traditional "latkes" were prepared. We played the "spinning top" and our parents sang the Hanukkah songs in Yiddish and Hebrew. But along with that in our family X-Mas was also a very special day. On that day we would go to the 9th Fort and meet there the few escapees that were still alive. Then those who came from other towns joined us around the table and they were raising memories – the sentence "and do you remember…" would open some more memories. 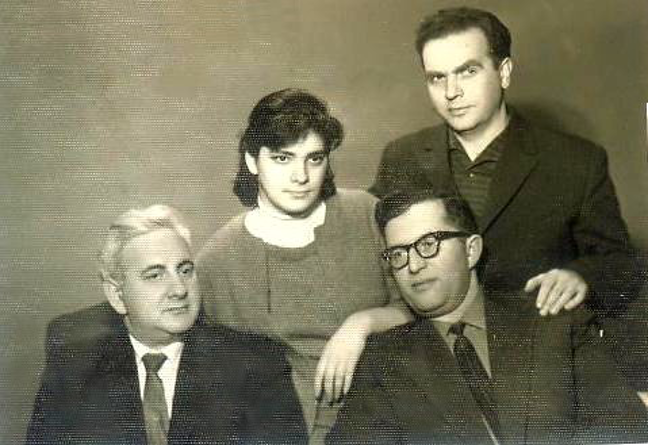 I was sitting there and listening to the stories about the escape, about the thorough preparation of the escape and about carrying it out. I still remember the feeling of wonder, amazement and admiration when I heard the details of this story.  They also spoke about the days in the forest as partisans. 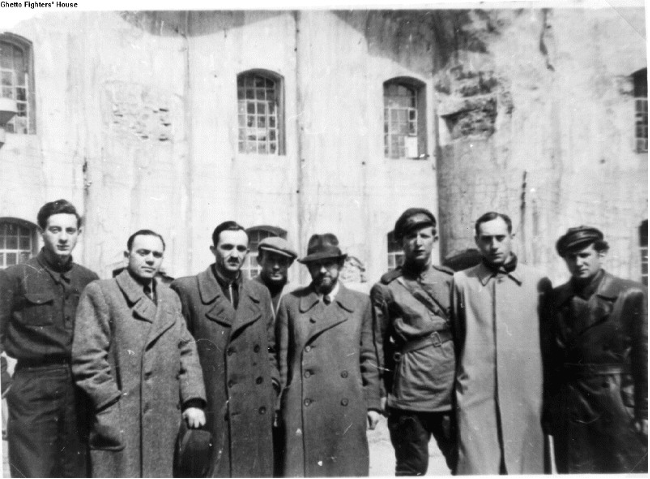 First on left: Pinia Krakinovsky 1948/9 with friends who escaped from the 9th Fort

strange back in Lithuania. But to do so I will have to go back to the story of my parents before and during the Holocaust.

My maternal grandfather Moshe Discant was a Hebrew teacher and a poet. 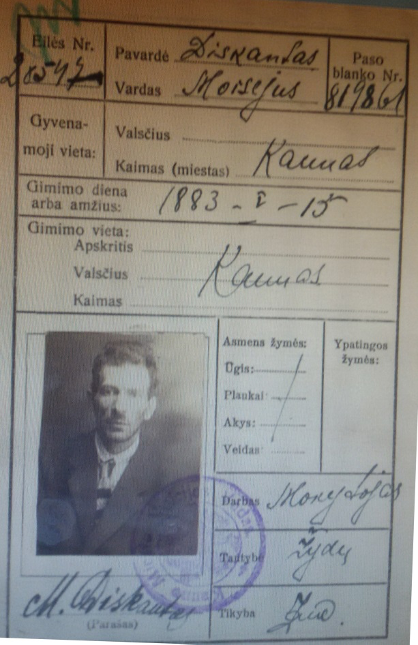 The poems that he wrote in Yiddish and Hebrew described the life of the ghetto prisoners, and his poems were known in the ghetto. Some of them were saved and published after the war. My mother graduated from the Hebrew school so she spoke this language freely as well as Yiddish which they spoke at home.

With the beginning of the war my father’s and my mother’s families were imprisoned in the ghetto.  Both my grandmothers and my maternal grandfather were killed. Two of my uncles – my mother’s brothers fell in the ranks of the Red Army - Isaak Discant in the first days of the occupation and Aizik almost at the end – in 1944 near the town of Taurage

My father and my uncle Aba Discant were both caught when they were on their way to join the partisans in the forest. After being tortured in the prison they were sent to the 9th Fort.  There comes the story of their remarkable escape when all the 64 inmates whose work was to dig out the bodies of the murdered from the pits and burn them, succeeded to run away. The plan was unbelievable but against all odds it was carried out. My father Pinia Krakinovsky was one of the key figures in performing the preparation - he was the one who drilled the holes in the metal door. He worked long hours during the day when the prisoners were in the field outside – he pretended be sick which was also dangerous because the Germans could kill him any day. But by 24 December he finished his work – he drilled about 350 holes and that made it possible for the prisoners to leave the fortress. 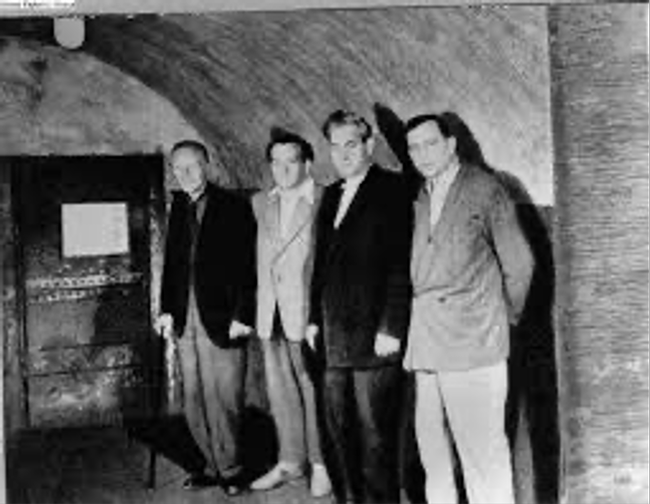 Four who escaped the 9th Fort next to the metal door 1949, Pinia Krakinovsky second from right

After the escape my father and uncle joined the partisans and my mother joined them in the forest later.

When I was born they gave me the most meaningful name because ya’ar in Hebrew means forest.

When 10 years later my brother was born he was named after our grandfather Moshe Discant.

I really believe that sometimes the name of the person influences his fate. I think that is why I became interested in what happened to my family during the Shoah. As I read somewhere in every family of Holocaust survivors one of the children becomes a memory candle. So it happened to me. But to start to really learn about the details I began much too late when there were not many people left to ask questions. 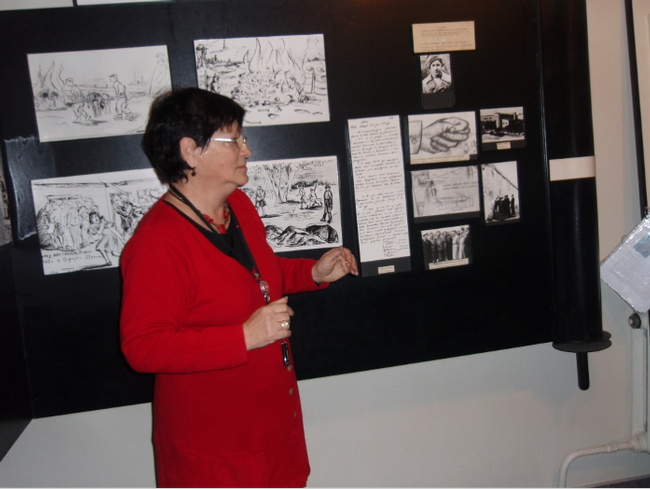 I began to give lectures, actually I was telling the story of my family during the Holocaust. But then I understood that it was not enough so I started looking for material about the Shoah, and the more I read the better I understood that I have to know much more. I joined different courses to get more information. I remember the first group that I had was to accompany to Poland as a guide. A few years later I began to work as a lecturer with groups of students coming to Israel to participate in seminars about the Shoah. And then I was invited to hold seminars for teachers in Lithuania. I still remembered Lithuanian so this was the language of the seminars though the materials that I prepared about the Vilnius and Kaunas ghetto were in Russian.

Every year there is a group of second generation of survivors – people whose parents were Litvaks - come in September to Lithuania and visit Paneriai and the 9th Fort. 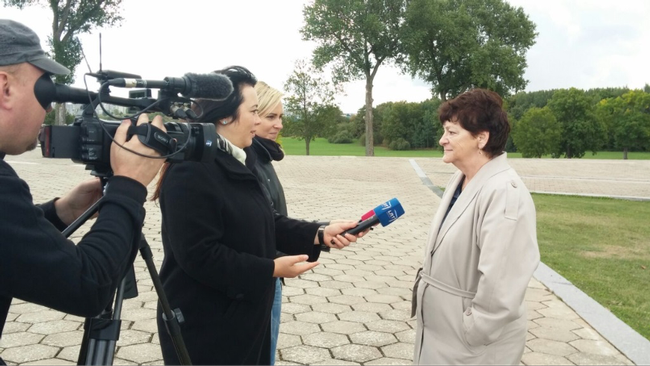 Ya’arit interviewed by Lithuanian media at the 9th Fort 1997

Since 1989 when I first came back to Lithuania I have seen many changes in the attitude of people to the problems (and there are many) of the Shoah. And I want to cite the words said at one of the memorials that "Lithuania will not be free of the past until she acknowledges that it happened."

Today I am a proud grandmother of 5 grandchildren – 3 girls and 2 boys, and my eldest granddaughter is joining the army in a few months. A few years ago we visited Lithuania – my elder son with his wife and children, and I am glad that I could take them to all the places that connect me with Lithuania.

Ya’arit Glezer bridges territorial, cultural and social gaps. Her Litvak roots are profound. Born and raised in Kaunas to a long line of Litvaks, Ya’arit embraced her Zionist home. She and her husband with their first born son made aliyah to Israel the following year after her parents. Today Ya’arit’s family is four generations in Israel.

As a teacher professionally, Ya’arit travelled to Lithuania many times to train Lithuanian teachers how to teach about the Holocaust. She flows seamlessly in English, Hebrew, Yiddish, Lithuanian and Russian. Ya’arit exemplifies the Litvak of today.