Photographed by Judi Langer-Surnamer Caplan Judith27@aol.com This e-mail address is being protected from spambots. You need JavaScript enabled to view it

While walking through the Jewish Cemetery in Cholon, Israel, one can see memorial after memorial to the many Jewish shtetls that were flourishing all over Europe before the Shoah. Among the towns of “Litvakia” for which memorials were erected in Cholon are the shtetls of ANIKST (Anykš?iai, Lithuania), DISNA (Belarus), KALVARIJA, Lithuania, OSHMINA (Ashmyany, Belarus), PLUNGIAN (PLUNG?), Lithuania, and VORANAVA (Belarus). 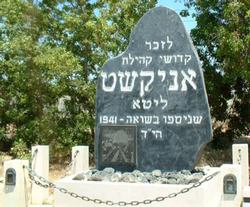 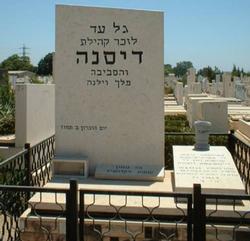 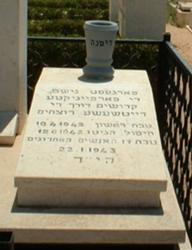 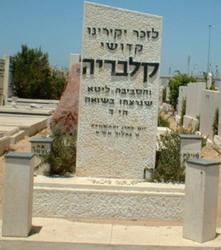 To the memory of our dear ones, The Holy ones of KALVARIJA And its surrounding vicinity Lita Who were murdered in the Shoah. May the Lord revenge their blood Day of Annihilation 9th of Elul 5701. 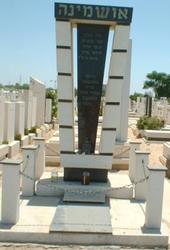 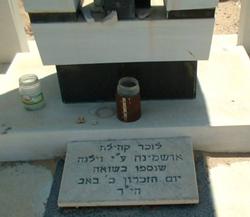 In Memory of the Kehillah of OSHMINA, Vilna. That was destroyed in the Shoah. Remembrance Day 20th of Av. May the Lord revenge their blood. 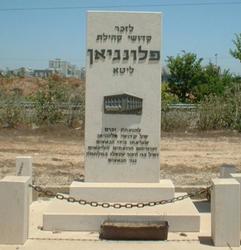 In Memory of The Holy Ones of the Community of Plungian Lita.
To perpetuate the memories Of the holy ones of Plungian Who were slaughtered by the Nazis and their murderous Lithuanian helpers and in memory of the inhabitants of the town who fell in the war against the Nazis. 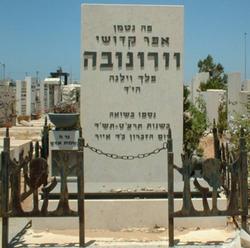 Here is buried The ashes of the Holy Ones of VORANAVA a section of Vilna. May the Lord revenge their blood Who perished in the Shoah in the years 5699 – 5794, Memorial Day the 24th of Iyar

Share this entry:
about the author
Judith Langer-Surnamer Caplan

Judith Shulamith Langer-Surnamer Caplan Judith27@aol.com This e-mail address is being protected from spambots. You need JavaScript enabled to view it is the Editor of the LitvakSIG Online Journal. Judi, who has a BA in English from Brooklyn College, an MS in Mass Communications from Syracuse University, and has studied at Seminary College of JTS, taught English in the NYC high school system. Judi is also a poet and short story writer, and her articles on genealogy have appeared in AVOTAYNU and THE JEWISH STAR.

Judi continues to research her extended mishpacha, especially her many Litvak connections: KAPLANS in Keidaniai or Kvedarna; COLUMBIS/KLOMPUS in Vieksniai or Sveksna, Lithuania; BOCHURS in Skaistkalne, Latvia, & Birzai, Lithuania; LEPARS in Zeimelis, Lithuania; and SURNAMERS and ZURINAMERS in Siauliai & Zagare, Lithuania, and Liepaja, Mitau, & Riga, Latvia, as well as Suriname, the Netherlands, Israel, South Africa, and England. The Surnamer family has been traced back to the mid 1600’s, to Esther Isaac HaCohen and Zadok Simon HaLevi Van Coerland.

Judi has talked about "How to Read a Hebrew Tombstone Anywhere in the World" and "Creating and Publishing a Family Newsletter" at several IAJGS Jewish Genealogy Summer Conferences, including the 24th IAJGS Conference, July 2004, in Jerusalem. Judi is also the founder of UpRoots! Genealogy Research Services http://www.uproots-genealogy-services.com/ and does professional genealogical research in the metropolitan New York City area, including Long Island.