LitvakSIG was officially founded in 1998, retroactive to 1997. In 1995, Ed Kohler founded a group that was called the NW Lithuania SIG, and did not include Vilna Gubernia; it did not last that long . Davida Noyek Handler announced the founding of LitvakSIG, to encompass all of historic Lithuania, at the IAJGS Conference in Paris in 1997, and after the Conference, she and David Hoffman became co-Coordinators.

The structure of having two Co-Coordinators created considerable tension , and, David stepped down from that office in 1999 but remained on the Board.

When the idea of the All Lithuania Database was first formulated back in late 1997, none of the LitvakSIG leadership had any idea that the organization would have access to whole lists that could be translated. They knew that many researchers had received information from the Archives about their own families and that sometimes on those documents other families were listed. The initial idea was to share the data about those extra families with people who may be researching those names. Everyone was therefore encouraged to forward all of the acquired information to a central pooling place, which came to be known as the All Lithuania Database (ALD).

EVOLUTION OF THE ALD

In 1998, LitvakSIG became aware that we could obtain hard copies of revision lists from the LVIA. We started with the 1858 Revision List because it was available for most of what was considered Lithuania at that time. We would purchase copies of the revision list and then translate it in the United States; therefore, we paid both for the copies and the translations.

At that time, the ALD still contained the partial records with which it was started, as well as the complete lists that LitvakSIG was beginning to order. In early 2001, LitvakSIG decided to remove the partial lists from the ALD and concentrate on whole lists that were ordered from the Archives. While the lists that came from the LVIA – the Lithuanian State Historical Archives in Vilnius -- tended to be bigger lists – revision lists, etc. – many of the lists that came from the Kaunas Regional Archives were smaller lists – various sorts of tax lists and electors’ lists, etc.

For a number of years, getting lists from the LVIA was often an uneven experience. Different lists appeared to be available only through certain archivists, and it was frequently not predictable which hard copy lists would be available. After the 2006 changeover in LitvakSIG administration (see below), LitvakSIG stopped trying to get hard copy lists and instead ordered lists to be translated in the Archives. As a result of this, the amount of data that was translated and uploaded to the ALD increased significantly.

FUNDRAISING AND ITS EVOLUTION

When we learned we were able to get whole lists, back in 1998, we found out that although revision lists were divided by town, they were grouped by Uezd or District. Rather than fundraise by town alone, LitvakSIG chose to fundraise by District, in part because researchers were finding that other branches of their families lived in, or were registered in, nearby towns in the same district, and this approach enabled researchers to see data for these other family members.

When it was first decided to ask for a $100 contribution for a District, the underlying approach was that this contribution would entitle a researcher to “all future translations” from that District. But it was becoming clear that with more translations taking place, more money would be needed. In 2006 and 2007 discussions began to take place among LitvakSIG leadership about issues leading to the transition between a qualifying contribution being guaranteed unlimited access forever, and a contribution guaranteeing access for a finite time. This led to the decision that a $100 qualifying contribution would guarantee access for five calendar years, a policy that took effect on Jan. 1, 2012.

Initially, DCs sent translated files to contributors as email attachments. That was becoming cumbersome and many districts started using Nexo sites to provide contributors access to translated files. That gave way to Shutterfly sites and in June, 2017 to the DRG sites linked to the LitvakSIG website, which are used today.

LitvakSIG was always a membership organization – initially dues primarily covered administrative expenses and were not used for translations, but as the number of translations increased and a general fund surplus began to build, the Board voted on a regular basis to transfer amounts from the General Fund to the Research General Fund. Funds from the Research General Fund were used as loans to Districts, as matching grants, and as subsidies. In some ways this reflected the belief of a number of Board members that LitvakSIG’s mission and responsibility was to translate all available genealogically relevant Litvak records.

LitvakSIG has always been an independent organization. At the beginning, LitvakSIG’s database, discussion group and website were “hosted” by JewishGen. Now the website is independent, but the discussion group and database are still “hosted” by JewishGen. LitvakSIG’s All Lithuania Database had been the only database of Lithuanian Jewish records until 2004-5, when JewishGen, as part of its efforts to launch all-country databases, launched the JewishGen Lithuania Database (JGLD). In 2000, LitvakSIG had signed an agreement permitting JewishGen to display LitvakSIG-originating data in the JewishGen Lithuania Database, clearly indicating its origins with LitvakSIG.

In 2008, JewishGen reached a licensing agreement with Ancestry.com, which ultimately included data that originated from LitvakSIG. The agreement between LitvakSIG and JewishGen specified that the data be attributed to LitvakSIG, but it took considerable pressure on Ancestry to accomplish this. After 2008, no additional LitvakSIG data has been shared with Ancestry.com

Although the SIG did hold elections prior to 2006, there were rarely any new candidates for Board positions (despite the existence of a Nominating Committee) and although the elections were announced on the Digest, many LitvakSIG members barely knew there were elections. In early 2006, a group of people who had been active in Litvak research, including Howard Margol, David Hoffman, Ann Rabinowitz, Ada Green and others, started organizing an opposition effort. They planned to run a slate in the 2006 Board elections. Howard publicized his slate, and also said that he planned to vote for current Board members Olga Zabludoff and myself [Judy Baston]. Davida, who was facing some health issues, stepped down as President.

Two major changes took place after the 2006 election – a visible increase in transparency in the governance of LitvakSIG (especially regarding translations and finances), and a dramatic growth in the number of records translated, as LitvakSIG changed from its past procedure of trying to obtain hard copy lists to arranging to get lists translated at the archives in Lithuania. Howard had developed an excellent relationship with a number of archivists in Lithuania, and as LitvakSIG President and Coordinator of Records Acquisition, he put that rapport to good use.

The changes in aid of greater transparency included having regular monthly Board meetings, posting an edited version of Board minutes online (the Members’site), presentation of financial and translation reports at the LitvakSIG Annual Meeting at Conferences, and requiring that all checks issued by LitvakSIG would require two signatures.

Part of the changes that followed the 2006 election were bylaws amendments that provided for a nine-member board, and for term limits (no more than three three-year terms), which were enacted in 2007. These term limits have resulted in some longterm LitvakSIG leadership being “termed out” – Eden Joachim and myself in 2016 and Carol Hoffman and Dorothy Leivers in 2018. The bylaw provided that after a hiatus of at least one year, a termed-out Board member could run again. Although the term limits do create vacancies that enable new, talented individuals to join the Board, they can also result in a lack of institutional memory on that body. 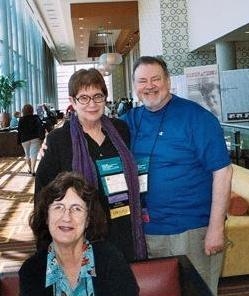 We can’t look back on LitvakSIG’s first 20 years without remembering some people who are no longer among us, and without whom LitvakSIG would not be the organization that it is today.

Carol Baker served for many years as our Research Group Coordinator and dealt with records acquisition. She was tireless in working with translated files to ready them for their upload into theALD. I always looked forward to spending time with Carol at IAJGS conferences, and we had some lovely adventures, a helicopter ride over the Grand Canyon, a gondola ride (with Davida) at the Venetian in Las Vegas, and shopping at Harrods in London.

Howard Margol became LitvakSIG President in 2006 and subsequently as Records Acquisition Chair, he leveraged his excellent relations with Lithuanian archivists into a steady stream of translaitons for LitvakSIG. Howard had led a yearly trip to Lithuania for researc hers and was a steadfast benefactor to the Lithuanian Jewish community.

David Hoffman was a co-founder of LitvakSIG and also, with his wife Sonia, a key leader of the Grand Duchy of Lithuania Project, which acquired from the LVIA and transcribed the 1784 Poll Tax List for dozens of Lithuanian towns. These translations are now on the relevant DRG sites.

Gerald Esterson as an early Board member of LitvakSIG, developed the Lithuanian Given Names Project, which helps researchers to discover variants for given names that were popular in Lithuania. This has grown into JewishGen’s Given Names Database.

May their memories be for a blessing.