Oljas Suleimenov, a poet from Kazakhstan, wrote to describe a Russian landscape: “The woods are draped in Levitan’s canvas…” A hundred years after the artist’s death Levitan’s works still are synonymous with the Russian landscape.

It seems strange that a Lithuanian born Jewish artist who worked in Russia during the time of the pogroms and at the height of official anti-Semitism would became the most quintessential Russian painter. In his 40 years of life, Isaak Levitan painted many landscapes, which were later recognized to be among the finest masterpieces of Russian art, never searching for exotic and pretentious subjects for his paintings. The natural simplicity of motif and composition in Levitan’s landscapes is a hallmark of his artistic genius. It was evident from the very outset of Levitan’s career that he had an extraordinary ability to awaken deep human feelings through landscape painting. Although people are rarely found in his paintings, the complexity of the human soul and the destiny of man can be rightfully considered the true subjects of his paintings.

The portrait of the best Russian landscape painter Isaak Levitan by the best Russian portraitist Valentin Serov, who was also of Jewish descent, may be seen on the stamp above which was issued in Russia in remembrance of Levitan’s 50th death anniversary in 1950 as a set of two stamps. The second stamp with Levitan’s “Golden Autumn” can be seen on the right. It is difficult to imagine that this tired bearded man was just in his thirties – so many hardships, losses, humiliation had Levitan already lived through.

Issak Levitan was born in 1860 in the Lithuanian town of Kibarty {Kybartai, Vilkaviskis uezd, Suwalki gubernia} into a railroad station cashier’s family. His grandfather on his father’s side was a rabbi in Keidany {Kedainiai}, Kovno Gubernia. Even though he was Jewish, the artistically talented 13-year old Levitan was accepted to the Moscow School of Painting and Sculpture. His first attempts at landscape painting clearly show the influence of his teacher, Aleksei Savrasov. At the tender age of fifteen Isaak lost his mother, only to experience his father’s death a short two years later. Levitan had no money and no home, and had to find shelter where he could. Sometimes he was able to stay with friends and family, however he often resorted to sleeping in the empty classrooms of the school. After a night-watch man discovered the boy the School waived his tuition fee “because of extreme poverty and in recognition of his singular success in art.”

Levitan developed his personal style quickly. While the painter’s earlier works convey an intimate, lyrical character, his later works developed into a more philosophical art, which communicates his contemplations on the nature of man and the world. Such art was adored and respected by the Russian intellectual movement of the time for being an unadu

lterated specimen of “mood landscape.” His first success came to Levitan in 1879 when he showed his painting “Autumn Day, Sokolniki” at the students’ exhibition. A very devoted collector of Russian art, P.M.Tretyakov, bought the picture for 100 Rubles. He later bought many other works of the artist – which are now proudly exhibited in Moscow’s “Tretyakov Gallery” as part of the best collection of Russian art.

The painting “March” on the Russian stamp commemorating Levitan’s centennial birth anniversary was released in 1960. This picture was a common essay subject in Russian schools to teach students how to see the beauty of the Russian countryside, and to find the emotions of rebirth and new hopes in the early spring scene.

During the 1880s Levitan explored different styles, learning among others from Vasilii Polenov, his elder friend who was a teacher of the M

oscow Art School. Polenov had just returned from long trip to Egypt and Palestine and brought with him many etudes he made on the ancient land of Israel. He asked his Jewish friend Levitan to pose as Christ for his big canvas "Christ and the Adulteress.”

Its final version in oils was exhibited in St. Petersburg in 1887. The conservative press was extremely hostile to the painting depicting religious figures as common Jewish people and the Christian messiah himself drawn as a Lithuanian Jew. However Polenov’s work achieved a great success. Tsar Aleksander III ordered a copy of the canvas for his collection but required that Jesus should be depicted with an uncovered head as it was in Christian tradition and not like a religious Jew as on the original version. You may see Levitan wearing a kippah on the Russian stamp in the set issued in 1994 in honor of Polenov’s 150th birth Anniversary.

In the summer of 1887 Levitan made his first trip to the Volga. In this region he managed to capture the poetry and emotion of the landscape in an unprecedented manner. After he painted the picturesque vicinity of the town of Plyos, which he visited for several seasons, it became the famous destination for artists and tourists. Many of the Russian Orthodox churches that so harmonically blend into the Russian landscape now are most famous as subjects of Levitan’s works. No other artist showed Russian people the beauty of their country better than Levitan did.

As Levitan’s career reached its height so did anti-Semitism in Russia. In the September of 1892, with the expulsion of the Jews from Moscow, Levitan was confined to the village of Boldino in Vladimir province and was allowed to return only after the intervention of some of his influential friends. He didn’t convert to Christianity, as some did in tsarist Russia in order to obtain education, work opportunities, or the freedom to live in any place of the Empire. Everything he achieved was the exception, and was against all the odds.

In 1897 Levitan was diagnosed with a severe cardiac disease. Nevertheless, he continued to work with a particular intensity and inspiration. Levitan did not become a part of the modern art movement, remaining true to his realism, utterly alien to mythologizing and stylization. Despite his disease, Levitan continued to lead an artistically active life until the date of his death. He taught at the site of his primary artistic education, the Moscow School of Painting, and took part in organizing the Moscow Club of Literature and Art, as well as displayed his works at numerous exhibitions of such associations as theWorld of Art and the Munich Secession. In 1898 the Saint Petersburg Academy of Art awarded him the title of Academician.

When the famous Russian writer Anton Chekhov, who was close to Levitan, saw the picture he said: “You may call it whatever you want - it is Russia!” "The Lake: Russia (Russ)," (1899-1900) was the last large canvas Levitan painted. It was to be a kind of synthesis of all his searchings, a summation of all that is characteristically Russian: the great expanses of land and water, the white silhouettes of the churches, the great clouds driven by the wind, and the rustling reeds...—such were the artist’s last thoughts and feelings. A stamp with this picture was issued in a set of Russian art masterpieces in 1968. 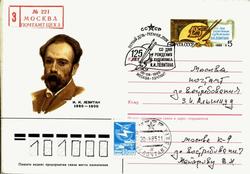 This pre-stamped envelope with original stamp and cachet was released in Russia in 1985 for Isaak Levitan’s 125th birth anniversary. It also bears a first day Moscow cancellation commemorating the events with the inscription “125 Years From the Birth Date of the Artist I.I. Levitan.

“Levitan is dying, it seems,” wrote his old friend, Chekhov... His “terrible thirst for life” fought against his illness but he was able not to complete the picture, as he wanted to. On 22 July 1900, Isaak Levitan passed away.

For more information on the life of Isaak Levitan, see the following links:

Link to Auburn University paintings by Levitan and others

Vitaly Charny was born in Minsk in 1953 and was brought up there. He graduated from Belarus State University in 1975 with a major in Nuclear Physics but couldn’t pursue a scientific career in the Soviet Union. He immigrated to the US with his family as political refugees in 1989. He worked in different places and fields including as a librarian assistant at NYU and at a lizard breeding farm in Alabama. For the last few years he has lived in Birmingham, Alabama, and has worked as a programmer-analyst for a Computer Science Corporation. His hobbies and interests include  philately (with Judaica as one of the topics); butterflies and dragonflies monitoring and photography; Jewish history of the Russian Empire/ USSR, military history, and the history of Russian Art; hiking; Jewish genealogy, including the origin and distribution of Jewish surnames in Minsk Gubernia; aquariums, terrariums, and wild flowers.