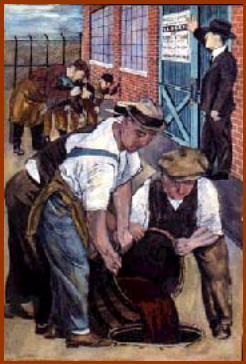 The painter, muralist, and printmaker, Ben Shahn, who was born in 1898 in Kovno, Russia (now Kaunas, Lithuania), into a family of Jewish craftsmen, moved with his family to New York City in 1906. I found a very interesting description of Shahn’s family and his childhood in the biography Ben Shahn: An Artist’s Life by Howard Greenfeld. There is a link to the first chapter of the book which was published on the Internet at the end of this article.

In 1913-17 Shahn was a lithographer’s apprentice while attending high school at night. He later attended New York University, the College of the City of New York, and the National Academy of Design in New York. His travels back to Europe in 1925 and 1927 exposed him to the works of the European masters.

Shahn’s first major work (1931-32) was a series of paintings of the trial of the anarchists Sacco and Vanzetti. Shahn expressed his sympathy for the defendants with great emotional power and satiric bite. That series, which brought him fame, was followed in 1932-33 by another famous trial, this one of the labor leader Tom Mooney. Later he made another famous series about the Lucky Dragon, a Japanese fishing boat that wandered into a nuclear test zone.

The Eighteenth Amendment to the Constitution (known as the Volstead Act) banned the manufacture, distribution, sale, and use of alcoholic beverages in the years between 1920 and 1933, the era of Prohibition. When it quickly became apparent that the strict enforcement of such legislated social change would be impossible to achieve, New York City became a prime source of demand for bootleg alcohol. This illegal system mainly supplied the estimated thirty-two thousand speakeasies -- double the number of legitimate saloons that were in the city before 1920. 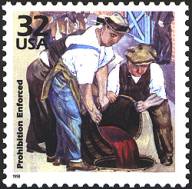 A 150-stamp set, Celebrate The Century, was the US Postal Service’s attempt to reflect 20th century American history in philately. One of the stamps in this series, Prohibition Enforced, depicts a detail from the Ben Shahn painting, now in the Museum of the City of New York, showing the federal agents disposing of the wine.

In 1933 Shahn enrolled in the New York City Public Works Art Project, under which he did a series of works on the Prohibition era. From 1935 to 1938 he worked for the Farm Security Administration as an artist and photographer. He took over six thousand photographs about the life of every day working people in the southern and middle western states.

In 1938-39 Shahn and his wife, Bernarda Brysen, executed a series of panels for the lobby of the Bronx post office, New York City, a work that took the form of a geographic panorama of American life.

Ben Shahn’s social awareness made him protest against the abstract expressionism that dominated American art during that time: “Is there nothing to weep about in this world anymore? Is all our pity and anger to be reduced to a few tastefully arranged straight lines or petulant squirts from a tube held over a canvas?”

The first major retrospective of his paintings was held at the Museum of Modern Art in New York City in 1948 and was followed by many others all over the world. Much of Shahn’s works contained Jewish themes, and his calligraphy frequently used the Hebrew alphabet as in the Alphabet of Creation, and Haggadah which was handwritten and illustrated by him in the 1967 Ecclesiast. In addition, he created murals for Jewish congregations including Mishkan Israel in New Haven, Connecticut, and Ohab Shalom in Nashville, Tennessee, as well as two mosaics for the Israeli oceanic ship Shalom. These mosaicswere purchased by the New Jersey State Museum when the Shalom went out of service.

Ben Shahn said, “I hate injustice. I guess that’s about the only thing that I really do hate… and I hope I will go on hunting it all my life.” His work reflects his concern with injustice, political freedom, and the state of humanity.

ArtCyclopedia: Ben Shahn on the Internethttp://www.artcyclopedia.com/artists/shahn_ben.html {which has links to additional articles about him as well as the works he created}

Painting the Town - the Museum of the City of New Yorkhttp://www.mcny.org/ (search on "Shahn") {with Six of Eight studies byBen Shahn for a mural intended for the Central Park Casino}

Vitaly Charny was born in Minsk in 1953 and was brought up there. He graduated from Belarus State University in 1975 with a major in Nuclear Physics but couldn’t pursue a scientific career in the Soviet Union. He immigrated to the US with his family as political refugees in 1989. He worked in different places and fields including as a librarian assistant at NYU and at a lizard breeding farm in Alabama. For the last few years he has lived in Birmingham, Alabama, and has worked as a programmer-analyst for a Computer Science Corporation. His hobbies and interests include  philately (with Judaica as one of the topics); butterflies and dragonflies monitoring and photography; Jewish history of the Russian Empire/ USSR, military history, and the history of Russian Art; hiking; Jewish genealogy, including the origin and distribution of Jewish surnames in Minsk Gubernia; aquariums, terrariums, and wild flowers.