Letters from Gelvan - A New Development

Many of you may remember "Letters from Gelvan" which I shared with you a few years back about twenty-two Yiddish letters written between 1909 and 1925 from my Grandfather, David Peretz, in Gelvonai, Lithuania, to my father, his son, Morris Adelman, in Cleveland, Ohio. My father who could not or would not ever share the contents had asked to be buried with those letters. Instead of burying the letters with him, these letters were rescued and translated in 1973, and as a result our family learned of an amazing history and discovered that our grandfather, David Peretz, was murdered in Gelvan in 1925.

Then, in a fast forward, an unexpected new development came about in September 2005, when I made the acquaintance of a young non-Jewish woman named Valeria. Providence brought her into my life when my son hired her to be a household helper. I soon learned that she was born in Lithuania, her mother still lives in Kaunas and her Aunt lives in Gelvan! When she told me she was going to visit her mother and aunt, she offered to bring me back some pictures of Gelvan. She was gone for two weeks and on her return had several pictures for me.

A few were of a Jewish cemetery in Gelvan, including a memorial to victims of the Holocaust. 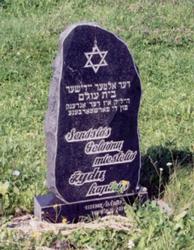 There were also three shots of headstones. I looked at the latter briefly before placing all the pictures in my desk drawer. A month later while packing for a trip to Phoenix to visit my two cousins whose mother, my father’s sister, was also from Gelvan, I remembered the pictures and took them out of the drawer and perused them once again.

This time I noticed that the picture on one of the tombstones was slightly legible. As I stared at the picture three letters jumped into my eyes: Daled, Vav, Daled - David!

I labored over the next word and finally my primitive Hebrew made out the word "Peretz" - and the largest letters indicated the last name ANDIMAN. I was in total shock. Although we were known in the United States as Adelman my grandfather used Adiman - Andiman - Eidiman so we were never sure of the actual surname. For 80 years no one in our family had ever known about the existence of this cemetery or our grandfathers final resting place. We all assumed it could not have survived. This astounding development I call DIVINE INTERVENTION. 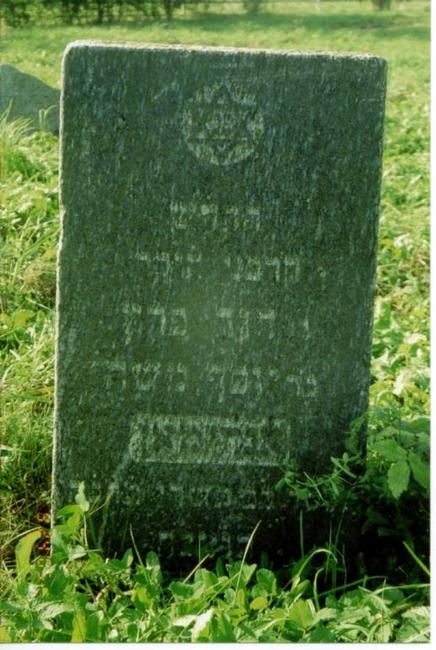 After much consultation we believe the stone reads:

Pay Nun - Here lies
The holy
Our beloved rabbi
David Peretz
Son of Yosef Moshe
Andiman
Tishrei ?? 568? [October 22, 1925]
May his soul be bound up in the bond of eternal life

This amazing discovery of the intact resting place of David Peretz brings final diginity to the remembrance he deserves.

Share this entry:
about the author
Geraldine Adelman Powers Volper

Gerry Adelman Powers Volper, gerryadel@adelphia.net This e-mail address is being protected from spambots. You need JavaScript enabled to view it , was born in Brooklyn, NY, and raised in Cleveland, Ohio, where she grew up during the Great Depression. During World War II, she followed her husband, Louis L. Powers (Powesky), to various Army Camps for three years, until he left for the Philippines. She has saved an apologetic letter from General Eisenhower, denying her the opportunity to join her husband overseas. When her three children were in their teens, she returned to college. She became the founding Librarian of The Solomon Schechter Day School of Cleveland until her recent retirement after serving for twenty years.

Her father, Morris Adelman (Moishe-Joisef), who lived with her the last ten years of his life, was a man who personified the word "mensch." He and his wife Lena were blessed with three devoted daughters, Gerry, and her sisters, Ruthy Adelman Schwartz and Arlyne (Etteleh) Adelman Hoffman. He lived to know and enjoy all of his ten grandchildren upon whom he had a profound effect.

Morris Adelman was an avid reader, and one who never stopped enjoying the study of Torah. When he retired, he became a High Holiday cantor for various synagogues. His old world Litvak ways never left him, thereby enriching every life he touched.

Gerry would like to express her deep appreciation to the LitvakSIG Editor, Judi Langer Caplan, for her remarkable skill and encouragement in making this whole project come together.

She would like it to be known that these letters from Gelvan would have never seen the light of day, without the encouragement and urging of her son, David S. Powers, Professor of Islamics at Cornell University.