I was an early member of LitvakSIG; my research grew and was accompanied by LitvakSIG over years and years. I first began researching all my families in 1995. From the time of the establishment of LitvakSIG, gradually, more and more material was added, so that it has been important to retrace my steps now and then. Nowadays, one can do much more research, seated in front of a computer screen, than ever before.

My research on the KLOTS and KLING families began with an old page on which my aunt had written down details about her mother’s family, while talking to a first cousin of hers. My father’s maternal grandparents had lived in Lithuania. Eventually I learned that members of the family had lived in several different locations in northern Lithuania, in the Kaunas gubernia. These towns include Ukmerge (Jewish name Vilkomir) and Panevezys (Jewish name Ponivezh). Following is a map I drew of the region: 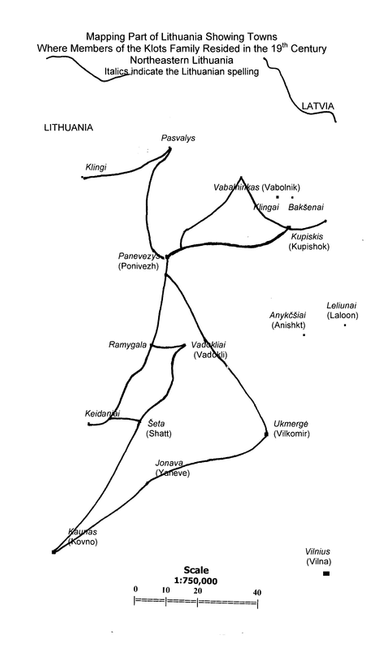 At first all I had was a very basic family tree. Scribbled on the same page were a few addresses of the cousins, some of whom I was able to contact. I did archival research in the Allen County (Indiana) Public Library, where, looking at microfilms, I found entry data of my grandmother and some of her siblings into the United States. Through the LitvakSIG or JewishGen Discussion List I found Anne Rabinowich and Linda Cantor, webmaster, who had founded a Shtetlinks site at JewishGen.org for Kupishok. They had been researching Jewish residents of Kupishok and the vicinity. (We first met at the 1999 IAJGS conference in New York). But my period of frustration at not finding information about the two families did not end there. In a way it only grew, when none of my ancestors showed up in their lists.

Theoretically, in the LitvakSIG databases, I was able to trace the Klots family to the town of Shatt (Lithuanian name Seta). We knew of two brothers, Movsha and Benjamin, and two sisters, Leah and Hana (Of Hana I never succeeded in finding out anything). But I couldn’t immediately accept this connection to Shatt. No one in the family had known about Shatt. And I couldn’t understand: why Shatt? Later I learned that the family was often registered in a former hometown many years after leaving it, and this even includes children of theirs who had never lived there. A David Klots, the same name as that of my great great grandfather, was registered in Seta. It took me a long time to connect to him, and to realize that he was indeed my gggrandfather. [See about the discovery of the marriage document, below.] Later I was able to continue mapping men of the Klots family through Revision Lists at LitvakSIG, and found that the father of David was named Mendel Movsha.

In 2002 we traveled to Lithuania with a group led by Howard Margol. In advance of this trip, we sent the lists of what we knew about my two main families, and what we would like to find out, to the archives. While there, we received some documents of the family. One of the best was the marriage record of my great grandparents, Moshe (Movsha) KLOTS son of David of Seta and Nehama Zlata KLING daughter of Shlomo of Vabalninkas, on June 10, 1883. (Nowadays, this record can be found among the LitvakSIG databases.) This is what I call my Rosetta stone, of connecting the Klots and Kling families. Why Movsha and Nekhama Zlata came to be married in Kupishok (in Lithuanian: Kupiskis) will remain a mystery to me. Kupishok was the name of the hometown given to me from my father’s relatives. But, although Moshe and Nehama Zlata were married in Kupishok, they did not live there long. According to records found at LitvakSIG, the youngest two of the eight children in the Kloch (note the spelling) family were born in Kupishok, Shleimse in 1905 and Shalom in 1906. And three of my great great grandparents died in Kupishok. But the question remained: where was the family in the interim period? And a second question will remain: where were their grandparents living?

Among the far-flung members of the KLOTS family was a branch who had immigrated to South Africa, and settled in Oudtshoorn, an ostrich town in central South Africa; before World War I, they too were involved in the ostrich feather trade. We had met members of this family who had made Aliyah to Israel. Their story was truly fascinating, and I was able to compare notes with them on our visit there in 2010. They knew that their family had originated in a village called Vadokli (Vadokliai in Lithuanian), also in the region of Kupiskis. Very few records from this village are available, and none for my relatives. And so I have only their knowledge of the family heritage to rely on. Vadokli is close enough to Shatt for a bride from Shatt (Leah Klots daughter of David) to have married a groom (Avraham {Hurwitz} Wilck) from that village.

I still felt at a loss in tracing the family. Then one day, a few years after receiving the abovementioned marriage data, while searching yet again for the Klots family at LitvakSIG, I found the family, name spelled differently again, living in a rural location, in a Revision List. The surname on the list was Kletz, and they were living at Pozerka farm, in the region of Cypenai volost, according to a list of residents living outside of towns. The actual date of the census was January 1898. Since my grandmother, Dina Klots, was born in September 1896, I assume that she was born there. At the time of the census, Movsha and Nekhama were living on the farm, with the older four of their children.

This photo was taken by the next family to live in the house, after my ancestors had emigrated

Meanwhile, through LitvakSIG I have found important records for other families, especially PELIS and BIRGER, related to the Klots family, who also had lived in Kupishok. Researching them was easier, because they had remained in the town for generations.

While researching the KLOTS family, I was also attempting to research the KLING family from Vabolnik (Vabalninkas in Lithuanian). All I had at the beginning was the names of the mother, Sprintsa, and the names of two children of hers, Nekhama Zlata and Yehiel David. There was another Vabolnik Kling family who had done much research on their family history. Henry Hurwitz posted a letter on the JewishGen Discussion List [see letter below], about his wife’s family. I responded and received an interesting response, which got my hopes up. He wrote that his family was from Kupishok(!) and he sent me an impressive handwritten forty-one page file, page by page. This was a WOW! moment. They had much more knowledge about their family, because of two reasons: first, a belief that they had descended from the Holy Ari, a well-known, illustrious Rabbi who lived in Zefat at the end of his life and is buried there; and secondly, Rabbi Simcha Kling had begun researching the family much earlier in time than I did. Because of their firm belief of their illustrious ancestry, they had a special impetus to try and prove this connection. [In case his name sounds familiar, Harry was a South African who had made Aliyah to Israel, and an aide to Prime Minister Begin.]

The claim of the KLING family to be descended from HA-ARI, the reknowned
kabbalist, (1534-1572) is oral. This oral tradition exists in several
branches of the KLING family. A critical genealogical document showing
this connection was destroyed in a fire in the USA….

My family has no such tradition, and members of the family have always been Orthodox—so surely they would know of such a tradition--hence I reached the conclusion that the descendance from the Holy Ari of the other family most likely is maternal. And I do believe that the two families are related, though the connection is a remote one.

Researching this family has not been easy, but I have had some fantastic input from distant cousins in various directions. One ancient record received in the Kaunas archives is a Revision List from 1834, and another is from 1842, showing Klings living in a tiny village named Klingi, and another village named Baksenai. We visited these villages in our second visit to Lithuania in 2011, when we traveled there to complete documenting the cemetery of Vabalninkas (These records are online at JOWBR but mostly lack surnames). Starting with these early records, and working with the other family’s records, and records online at the LitvakSIG site at JewishGen.org, I believe that I have identified three separate branches of one Kling family. The third branch is more closely related to my own, and this family settled in Israel before World War II.

The 1920 US census found ten members of the Klots/Kling family, now named Kalish, living in a tiny tenement apartment on the Lower East Side, New York. These included my great grandparents, Moshe and Nekhama Zlata, my grandparents Dina/Dora and Simcha/Sam Goldenberg with my infant father, Haim/Hy, and five other mostly-grown children of Moshe and Nekhama Zlata. There are still holes in what I know, but combining cooperation with members of various branches of the families with research among the records in the LitvakSIG databases, and US census data found online at Ancestry.com, I was able to make satisfying progress, and to write my family history book, We Were All Klutzes.

After graduating from the University of Wisconsin - Madison, in 1969 Ellen moved to Israel, and lived on a kibbutz for over a year. It was her second time in Israel. When she left the kibbutz, she moved to Jerusalem; for the past 40 years, she has lived in Ramat Gan.

When her husband Zvi decided to go into business for himself, and started an investment business, she became a "silent partner".

She has three children: Avner, Amir, who lives in Washington D.C., and Raquel; three granddaughters; and two cats.

Since 1995, Ellen has been actively researching her family’s roots, with ancestors from five modern-day countries. This has included traveling to ancestral towns, documenting old Jewish cemeteries in Lithuania and Germany, writing articles on topics related to her research, and translating material from Hebrew to English. It has been a rewarding, educational experience, involving contacts on four continents, not including Israel which is in Asia. Ellen has published three family books: We Were All Klutzes, about the Klots (and Kling) families of Lithuania; The Werthans of Rotenburg an der Fulda; and The Brenn Family of Pinsk.