In 1852 the Central Archives of Old Record Books was established by the personal decree of Russian emperor Nikolay I. The main purpose of establishing the archives was to collect all record books of institutions of the former Grand Duchy of Lithuania from Vilnius, Suwalki, Grodno, Minsk and Kovno provinces. During the XIX and XX centuries archives received for preservation documents of state institutions of Russian Empire which functioned on the territory of Lithuania, a few fonds of courts of Kaiser Germany and documents of religion institutions. Since that time archives has changed its title and location. In 1957 the Lithuanian Central State Historical Archives was established. The eldest documents of Lithuanian national documentary fond dates from the XV century till 1918 year were delivered to the new repositories.

All documents of archives can be divided in to 8 complexes:

1 - fonds of the institutions of Grand Duchy of Lithuania (XV– XVIII century);

Available on line for free are the following:

During wars and fires many documents were destroyed. Therefore, from the period of the Grand Duchy of Lithuania (LGD) only a small part of documents survived. The main source for Jewish history from that period are the documents from different state institutions such as the Treasury commission of LGD, collections of documents and others. One of the main groups of documents are population revisions of LGD in 1764, 1765, 1774 and other years.

One of the examples: The revision list of Vilnius Kahal from 1765 year. Here there is the information about famous Jewish rabbi, the Kabala researcher and scientist Elijahu ben Saliamon Zalman, who was called Gaon of Vilna („ha’Gaon mi’Vilna”). The document is written in polish language, so names were pollinized, - on Niemieckaja street lives “Eliash Zalmanovich, with his wife Hana, son Zelman, daughter Basia and maidservant Nahama”.[1] 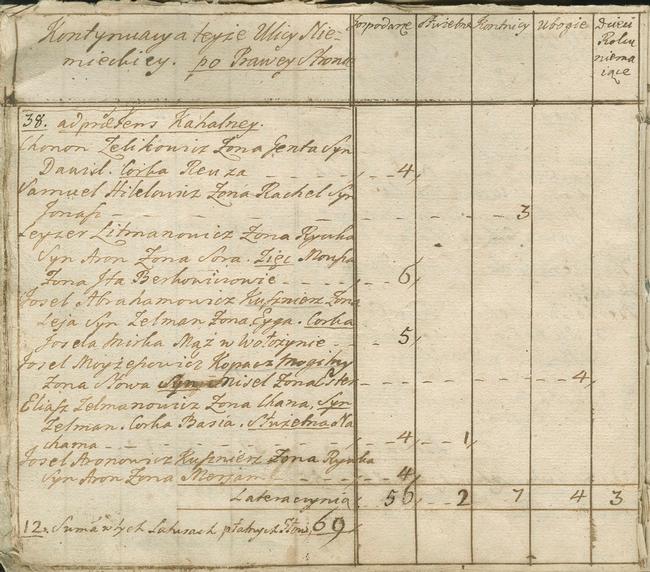 In the end of the XVIII century Lithuania was occupied by the Russian Empire. It was a very bureaucratic state, so all events and activities of empire people were carefully documented. Especially that was in Lithuania which was a new incorporated land and very troubled region. Documents about Jews’ education, business, and other activities were recorded in documents of all institutions of that time. Many documents covering all of the XIX century are in the biggest fonds of Russian state institutions - the Chancellery of Vilnius Governor General, Chancelleries of Vilnius, Suvalkai Civil Governors, police offices of towns and districts, various commissions for recruiting. The Russian Empire period documents complex is the largest complex in our archives.

Some examples of documents from different fonds showing that Jewish documents are in every archival complex.

Vilna Imperial University list of students who received scientific degree in medical department: In 1820 year 7 women received the diploma of midwifes. One them was Jewish Haimova Sara.[2]

It is a very rare document, because in that time only noble man could study in the university. The exception was made for midwifes. Every year 5-7 women received the diploma of midwifes and among them Jews. 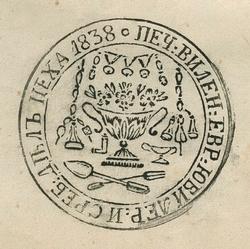 Every document has its own unique story. The document from the fond of Count Mihail Muravjov museum has the photo of Warsaw Rabbi Maisels Dob Beer (David Beresh) (1798-1870). 4 In November 1861 year he ordered to close synagogues as a sign of protest for imprisonment of polish patriots and supported the uprising in 1863 year.[4]

The project of the Choral Synagogue Tagarot Gakodesh (Taharot Hakodeš) in Vilna and the building department of Vilnius province board are documented. The Synagogue was built in 1903 year, and it is the only Synagogue which remained during the II World War from over 100 Vilnius synagogues.[5] 5

Fonds of Jewish institutions and organizations:

The document from Vilnius Jewish teachers’ institute fond - the report about the grades of students in the year 1914.[6] 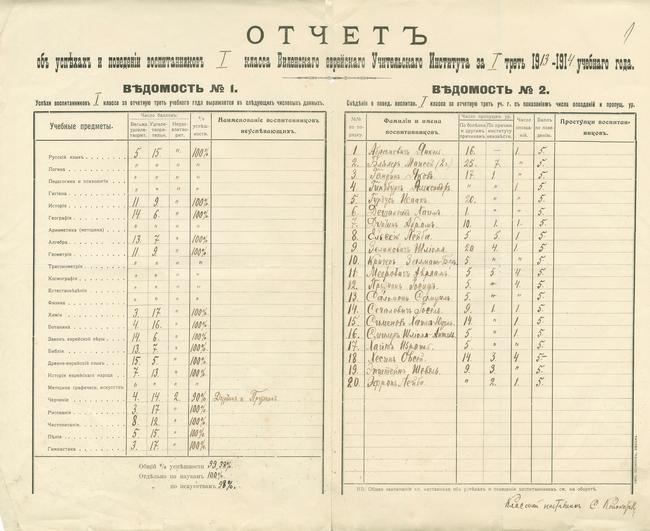 Documents preserved in the Lithuanian State Historical Archives are connected to the tragedy of Jewish nation in the middle of the XX century. It is known that 90% of Lithuanian Jews were killed during the Holocaust. It is very important to identify every Shoah victim. Jewish people who were born or got married until 1941 in one or other way became victims of Holocaust. The vital record books preserved in our archives helps to identify those people, their names, families and family relations between them.

Emanuel, son of teacher Meilach Arsh and teacher Braine Shapiraite Jewish nation, Lithuanian citizens, who lives in Birzhai was born on 22 November 1927 in Birzhai. On 1 January 1928 he was circumcised by A. L. Evin and Ch. Rigmont. In the end of the year the rabbi of Birzhai Jewish registration point L. Berenshtein confirmed the registration by his signature and seal.[7]

Punsk Icko, unmarried, the lawyer, born in 1905 year in Shventezheris, now lives in Lazdijai, the son of the Jewish nation Lithuanian citizens Falk and Sore Ziliauskaite Punsk and Kirshaite Raichel, unmarried, the dentist, born in 1901 year in Plunge, lives in Plunge, the daughter of Jewish nation Lithuanian citizens Morduch Leiba and Sore Kanaite Kirsh got married on 12 January 1932 year. The rabbi I.Rozenson, witnesses E.M.Ancevichius and M.Stoklickis. [8]

On 19 July 1940 year in Vilnius Leiba Jashuner died. He was unmarried, hairdresser, born in Vilnius on 21 September 1912 year, lived in Vilnius, Amatu street 11/5, Jewish nation former Poland citizen. His parents Jankel and Ita. The reason of death – the stomach cancer. He was buried in Vilnius Jewish cemetery on 21Jule 1940.[9]

And in the end I would like to tell one story. On 8 May 1914 in Vilnius Roman the son of Trakai was born to the second guild merchant Leiba Faivishev Davidov Kacev and Mina.[10]

Later his parents divorced, and in 1928 he moved to France with his mother. Here he changed his surname and become Romain Gary. During the World War II he was a pilot fighting against the Nazis and was awarded the highest award of France - the National Order of the Legion of Honor. After the war he become a diplomat and a writer. He was awarded two times the award in literature of France the Goncourt Prize, as Romain Gary and as Emilie Ajar (a literature pseudonym). 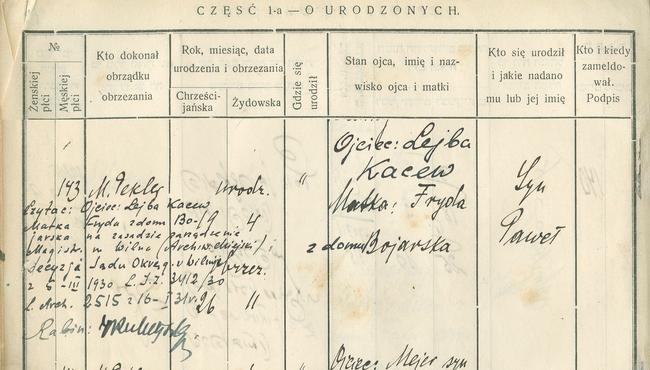 Leib Kacev, his second wife Frida Bojarskaja and children were killed in the Shoah. Last year all Lithuania was celebrating the 100 birth anniversary of Romain Gary. Many events took place. The Lithuanian State Historical Archives and Lithuanian Central State Archives discovered documents about Romain Gary and his relatives. These documents were exhibited in the Lithuanian National Commission for UNESCO and showed in a documentary movie about Romain Gary, “A promise delivered. Secrets of Vilnius”. Thus archival documents restored the history of the family, relations between relatives, between dead and alive.

Virginija Cijunskiene was born in 1954 in Panevezys, Lithuania. In 1977 she graduated Vilnius University with a major in history. From 1977 to 1979 she worked in the state audio-visual archives. In 1979 she started working in the Lithuanian State Historical Archives where she has been the director since 2011. Virginija Cijunskiene is a lecturer in Vilnius University since the year 2000.