Finding your record in FHL films

Genealogists often find themselves flummoxed by the challenge of locating the image of an original record in a Family History Library (FHL) film, based on the information provided in the record index. This guide is intended to show the steps, particularly for records from Lithuanian archives although the steps generalize to other archives as well.

To illustrate, I will show how to find the death record of this unknown VAINEROVICH, child of Yankel B. Shmuel.

The box on the right gives the film number (2205054), the item number (3; on the film, the items - you and I would call them sections - are demarcated at the beginning and end with easily seen storyboards that are white print on black background), the specific image number (missing in this case), and the archival reference (LVIA is the archive, in this case the Lithuanian State Historical Archive; 728 is the fond, 3 is the inventory, and 1469 is the file number, which the Family History Library calls a volume number). You will want to make note of the file number as you may need it, the rest is not important for finding the record.
Just to the left of all that, you can find the record number, F556. Male and female records are numbered separately (for deaths and births). F556 means the 556th female death of the year (1894). You will be looking for this number to locate the correct record, once you are in the vicinity.
After you click on the film number, you get a page of thumbnails, typically a thousand or so. Scroll down the thumbnails until you spot the storyboard for item 3, shown below. All you will be able to make out in the thumbnails is the prominent 3, but that’s all you need. It is image 252 in this particular film. 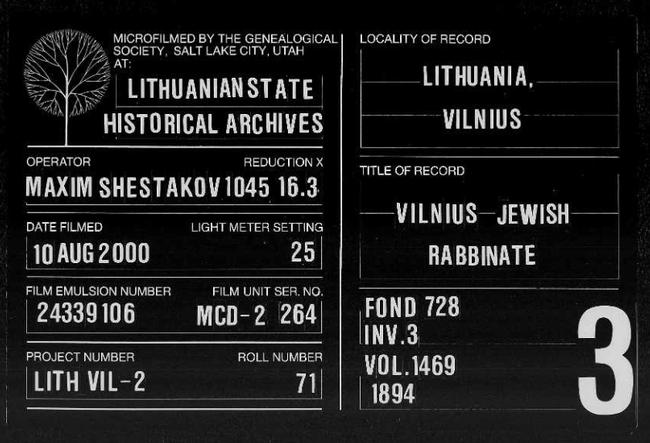 The storyboard confirms that this item contains file 1469 and no other files. It’s helpful that there is only one file here; sometimes they stick multiple files in a single item. If that should be the case, you have to browse until you find the correct book cover for the volume you want. In this example, there is only one book and the cover is the next image after the storyboard. The notations in the lower right corner show that this is volume 1469. 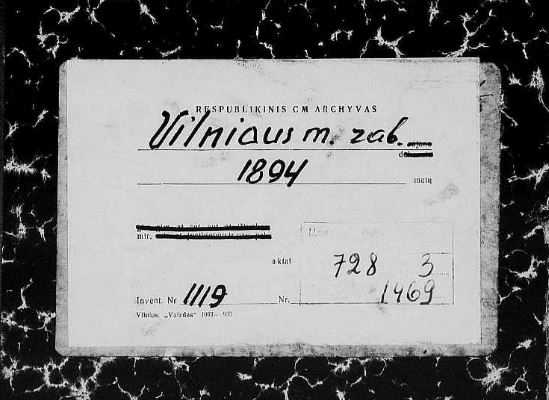 Now you have to find record F556, which would be, roughly, the 1100th death overall since males and females are all in a single list even though numbered separately. A quick inspection shows that there are 5 deaths on most pages, so go forward 220 frames to get close (image 472). It happens that all the deaths on that page are males, but if you go to nearby pages you’ll see that you’re in the 400’s of female deaths, so you have to go deeper into the file. F556 is actually on image 499:

The first two columns are for the record number - females always on the left, males always on the right. The next column is for the place of death and burial (it says Vilna). The next two columns are for the date of death according to the Christian (left) and Jewish (right) calendars. It only gives the month and day because the whole file is for 1894. The Christian date will be according to the Julian calendar in Russian Empire records. The next column is for the age of the deceased. Following that is the cause of death. The last column is the identity of the deceased. Here, it says "Stillborn daughter of Yankel Shmuelevich Vainerovich", which, per convention, means Yankel was the son of Shmuel. Thus Yankel B Shmuel in the index should be understood as Yankel ben Shmuel.
Other kinds of records can be found by similar steps, even though each record type will be organized a little differently. Here is an example of a marriage record. The record number is in the first column, while the next two columns are used for the age of the bride and groom. 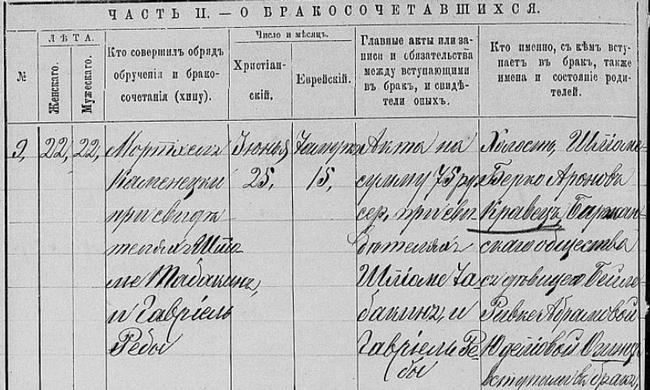 In some records, the index will give an image number instead of (or in addition to) the item number. The image number will *usually* get you close to your target but you still have to use the record number to find the correct record. The image numbers now are not exactly the same as they were when the records were indexed as familysearch has evolved. Recently, I saw a case where the given image number was 430 and the record was actually at image 340! Unusual, and probably the result of an actual error, but you never know.
Russ Maurer (send questions to me at vhrproject@litvaksig.org)
Nov. 28, 2020